Join us on Monday 7 September for an amazing wine tour and trip to Saint-Émilion!

With a history that goes back to prehistoric times, Saint-Émilion is a UNESCO World Heritage Site, with fascinating Romanesque churches and ruins stretching all along steep and narrow streets.

The Romans planted vineyards in what was to become Saint-Émilion as early as the 2nd century. In the 4th century, the Latin poet Ausonius lauded the fruit of the bountiful vine.

The town was named after the monk Émilion, a travelling confessor, who settled in a hermitage carved into the rock there in the 8th century. It was the monks who followed him that started up the commercial wine production in the area. (Source Wikipedia). 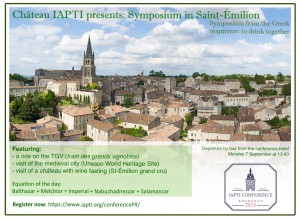 Only IAPTI is shameless enough to openly admit what translation conferences really are about! ;P

That’s right! Are you joining us, Lukasz?