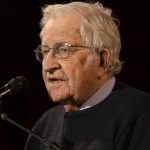 Noam Chomsky (Philadelphia, 1928) is active as both a theoretical linguist and a political analyst. In which concerns the first of these activities, Chomsky is one of the most important figures of 20th-century linguistics as the father of generative grammar, a theory which he introduced for the first time in 1957 in the work Syntantic Structures, which caused a revolution in the discipline. Afterwards, Chomsky explained and developed his theories in about 15 other books. Educated at the Universities of Pennsylvania and Harvard, Chomsky has taught and researched since 1955 at the Massachusetts Institute of Technology (MIT), where he is Professor Emeritus.
Chomsky’s political activity dates from the Vietnam War; in 1969 he collected in the book American Power and the New Mandarins several articles in which he exposed his criticism towards the attitude of the government of the USA in the conflict. Afterwards, he published nearly 30 books in which he developed his progressive ideas, very critical with his own government and with the dominant ideology. Some of the topics he has dealt most extensively with are the foreign politics of the USA, which he has criticized as imperialist, and the manipulation of the media. He ascribes himself to the anarchist tradition, specially the anarco-syndicalist one, and he is considered one of the most prominent left-wing intellectuals in the USA and the whole world.