Translation into a non-native language

This document presents a summary of the results of a survey on translation into a non-native language, conducted in February and March 2014. The data were collected through SurveyMonkey over a ten-day period, from February 28 to March 10. More than 780 respondents completed the survey. The sample was sufficiently large to split into various subsamples according to experience, certification status, and native language in order to identify major factors and tendencies beyond overall averages.
Only a limited number of such subsamples are presented in the report below. However, the data can be filtered according to any meaningful customized criteria. Given that the respondents? generous contributions enabled IAPTI to collect this information, we will be pleased to return the favor and check any specific correlations that might interest our colleagues.
Survey respondents offered a multitude of different viewpoints, and provided deep insight into many aspects. While it would have been impossible to present each individual answer, we aimed to provide a balanced selection of comments (typeset in blue). All the citations in this summary are taken verbatim from the survey replies; only a small number of obvious typos have been corrected.
Comments on the survey itself, the current analysis, or the topic in general are welcome at attila dot piroth [at] iapti dot org.
Acknowledgments: On behalf of IAPTI and the Ethics Committee, I would like to extend my sincere thanks to the many translators around the world who completed the survey. IAPTI greatly appreciates their generosity in both answering the questions and complementing them with detailed, frank and insightful views. I would also like to thank my fellow IAPTI Ethics Committee members, Maria Karra for suggestions on designing and improving the survey, and Vivian Stevenson for final editing and comments.
Sincerely,
Attila PiróthYou can read the full report here. 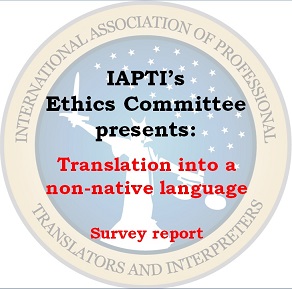